Home » News » Living a Dream: An Interview with Jackie Trance, Performance Dietitian for the Jacksonville Jaguars

As the city of Jacksonville starts to wake up, Jackie Trance (B.S. ’18) has already spent a few hours at her job. But while most people will leave their dreams behind as they roll out of bed, she is living hers. Trance works as the associate performance dietitian for the Jacksonville Jaguars, and every day she spends hours doing what she loves most: helping professional football players train, practice, and play at their best.

This dream job is just the latest success of Trance’s incredible journey—one that, in many ways, began at the FSU College of Health and Human Sciences. While she had an interest in football and nutrition from a young age, at CHHS she focused her talents and passion and set her goal of working in the National Football League as a dietitian. Her life has never been the same since.

Day in the Dietitian Life

All morning long, the sound of blenders whirrs through Trance’s area at the Jaguars’ facilities as she prepares protein shakes for players who have early workouts or meetings. While players are in their morning meetings, she does her desk work: ordering meals, reviewing and continuing meal plans, and looking at body compositions. By 9:30, players eat a snack and get ready for practice. “I’m always at every meal just to make sure if the players have questions or a certain dietary restriction, they’re aware of what their meal is and if they’re able to eat it,” she says.

Before the players head out to practice, Trance prepares individual regimens, including collagen shots, specialty shakes, pre-workout drinks and more. While the players are on the field, Trance makes sure that they stay hydrated, particularly in the Florida heat and humidity. Before practice finishes, she is already working to make sure the right players get their post-practice shakes. Her work moves right into lunchtime, where she answers questions about nutrition and diet. After lunch, she enjoys a short break before getting ready for dinner.

All in all, she works typically until 7:30 PM during football season. You might think that the offseason would be her time to rest, but instead, it brings its own exciting responsibilities. “The offseason for a performance dietitian is more of our busy season, because we don’t try to change the players’ body composition in season,” Trance explains. “So in the offseason, that’s when we get to have the most fun and can really be hands-on with the guys and changing their diet.”

Even with the year-round excitement and the long days, Trance says she wouldn’t change a thing. “Honestly, just getting to have that relationship with the players and even the coaches by far makes the long hours worth it,” she says. “It’s not your normal nine to five. I’m lucky if I get to sit at my desk for an hour.”

But normal was never something she wanted, she says. “I was never good at a job where it’s like, oh, you have to work from two to four even if there’s nothing going on. Just always being on my feet and just getting that time with the players—it’s a rewarding feeling.” 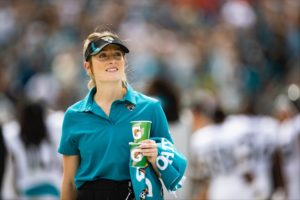 Trance credits her father for getting her into football, but she never considered a career in the sport until a few things happened. First, in middle school, she says that she struggled with low blood sugar but could never figure out why. In the course of her researching nutrition, she learned about professions that dealt with food and how it affects the body. Then, a few years later when she was considering universities, she knew that she wanted a school with a good football program and a nutrition program. When she received her acceptance letter from Florida State University, she knew that her search had ended. “I was researching programs at Florida State even before I got my acceptance letter, and I saw a major called dietetics and I thought this is cool!” Trance says.

During her freshman year Katy Meassick, former director of sports nutrition at FSU Athletics, came to one of her classes, and Trance knew right then that she wanted to follow in her footsteps. Later that year, she watched FSU Football win the National Championship, which made her desire to join the dietetics program even greater. She remembers watching the game and thinking “I want to be there! Like, how am I not there? I want to impact this team, too!”

In a few years, she got her wish and worked with FSU Football as part of her education. She recalls one of her favorite moments was the 2016 Orange Bowl game versus the University of Michigan, a nail-biting 33-32 win for the Seminoles. “I remember jumping up and down on the sidelines, and it was by far the best moment,” she says. “We obviously beat a lot of teams during my time at Florida State, but that game was extra special.”

While she enjoyed plenty of excitement and hands-on experience with the football team, she also gained the knowledge and skills she would use throughout her career at the College of Health and Human Sciences. Director of the Didactic Program in Dietetics and Undergraduate Coordinator Jennifer Farrell made the biggest impact on Trance. “The academic side of school was never my strong suit,” she says, but Farrell helped her succeed in the classroom whenever.

She also mentions that “the college was really good about showing what you can do [after graduation]. I think that’s one thing that keeps Florida State apart—they are very good about making connections with athletics, so if you are interested in sports, they’re so good about making sure that connection happens. Whether you are an undergrad student or master’s student, they’ll make sure that they work with you to see your goals accomplished.”

Eventually, she graduated with a bachelor’s in dietetics and exercise physiology. She went on to earn her master’s from Ohio State University before starting her job with the Jaguars. It still amazes her that she has attained her dream job so quickly. “I always told myself that I wanted to work in the NFL. That was my biggest goal in life. I did not think I was going to get here so fast,” she laughs. 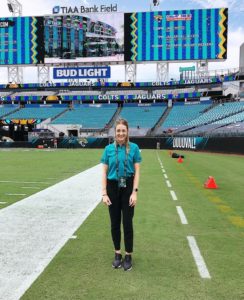 Despite having achieved so much already, Trance still keeps her sights on the future. “I still have a five-year plan of what my next goal is going to be,” she says. For current students, she recommends to “always have a goal, and also appreciate every step you take that gets you closer to it. I think it’s easy for us to say, okay, I graduated from my master’s. Check. On to the next one, and you never take time to appreciate it.” In the future, she hopes that she can help future dietitians find their own dream jobs by building an internship program.

She also stresses the importance of perseverance. “Don’t give up. You just can’t give up,” she says. “Don’t let the hours scare you. People are going to tell you that there’s a one in 30 chance—there’s 34 [dietitians] in the NFL right now—but if you want it enough and you put in the hours, there’s literally nothing that can stop you.”

Considering how much Trance has accomplished in such a short period of time, it’s hard to argue with her words. And with her experience, her dedication to her dreams, and her education from the FSU College of Health and Human Sciences, she will continue to prove that she can accomplish whatever she sets her mind to.

The FSU Dietetics Internship (DI) program is hosting a virtual open house on October 13 at 2 PM EST for those interested in becoming a registered dietitian. Register for the free event to learn more about the DI program.

Ever considered a graduate degree in Exercise Phys

Welcome back to campus, Noles! Here's to a great s

Congratulations to our Fall 2022 graduates! 🎓 T

It's been a busy end to the semester at the Colleg

If you try hard enough, you might be able to smell